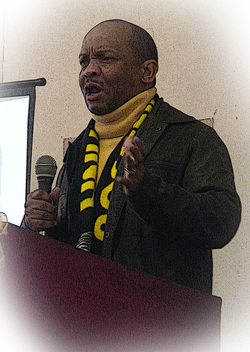 Pastor Lebelo was elected as the IAG General President in November 2013.  Before this he served as the General Secretary since 2005. Prior to this, he served in the Gauteng district leadership as secretary and the director of youth ministry (2002-2005).

Lebelo was brought up in a Christian family. His parents were ministers and founding members of the International Assemblies of God. They served for many years as tutors at the All Africa School of Theology in Witbank. Through their influence, their son at a very early age was involved in various missions’ outreach throughout the country. As a university student and a leader in the Hospital Christian Fellowship (HCF), he was involved in numerous Gospel outreach programmes in Lesotho, Swaziland, Botswana and Malawi. He graduated from the Medical University of Southern Africa (MEDUNSA) and Rand Afrikaans University (RAU). He also had the privilege of doing Management Development Programme (MDP) and post-graduate rehabilitation counseling course in the USA. In 2000, he resigned from his senior position at one of the leading cooperates in SA to be a pastor of Adonai Assembly in Soshanguve till this day. In his heavy schedule as the general president, he still manages to conduct leadership trainings, marriage enrichment seminars and counseling sessions for individuals and groups.

He is married to Elizabeth Azwhifheli Girlie and they are blessed with three sons. The family resides in Montana Park, Pretoria.

Pastor Lebelo served as our National Youth Director prior to becoming the General President.  He is greatly loved and respected by the youth of the IAG!!!! 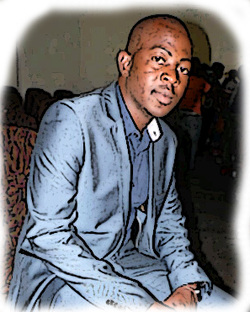 Keletso is the first born of the late Raise and Doctor Chiloane.  He was born at Acornhoek, Mpumalanga. He is a graduate at the Global School of Theology former SAST in 2013. He is a minister of the gospel of Jesus Christ in International Assemblies of God (IAG). He currently serves in the National Youth Ministry (NYM) of the IAG as the Secretary. Keletso is passionate about the work of the Lord.  He desires to see the youth of South Africa to engage for the cause of Christ.

Favorite food:  Braai Meat and Pap
Hobbies:  Cricket, swimming and soccer
Something people don't know about me:  I prefer to preach Christ, His life, death, resurrection and ascension to heaven.  Entrepreneurship is my highest goal.
Favorite verse:  "Blessed is the man who walks not in the counsel of the wicked, nor stands in the way of sinners, nor sits in the seat of scoffers; but his delight is in the law of the Lord, and on his law he meditates day and night." Psalm 1:1, 2 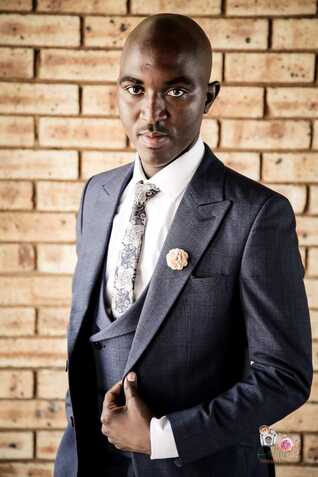 Home District: Gauteng
​​
I joined Mofolo IAG in 2010 and have been fellowshipping there to date. In 2012, I was elected in the finance committee for the church and a president for the youth. In 2015, I was elected a Gauteng district president and in 2017 elected vice president in national youth ministries, to date. I have a Diploma in Christian Theology and currently studying counseling degree with Team Impact Christian University.

I was born in Baragwanath Hospital (more than 3 decades ago). A firstborn of Mr and Mrs Leshiba, with 2 siblings. Raised at a small town called Shayandima in Venda, and then moved back to Johannesburg in 2007 to pursue my tertiary education in Electrical Engineering. I am now happily married to Z Leshiba.​

Favorite food:  Sea food, croissants and cheese.
Hobbies: Cricket and Guns
Something people don't know about me: I'm very shy person
Favorite verse: "Jesus said to him, “I am the way, the truth, and the life. No one comes to the Father except through Me". John 14:6 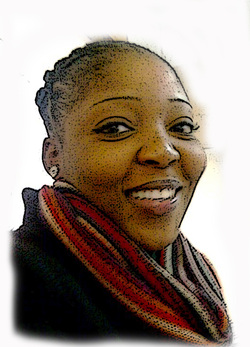 Thuli was born in Witbank and raised in Cullinan.  She is the second born and only daughter of three children of Pastor MMC Mashego and Pastor JN Mashego of the IAG.  She graduated from Tshwane University of Technology in 2011.  Thuli has faithfully been serving in the Highveld District Youth committee since 2011.  She fellowships at Balm in Gilead under the leadership of her mother Pastor JN Mashego and serves as the local vice chairperson there.

Favorite food:  Mince and rice with mash potato will get you in my good books any day.
Hobbies:  Singing, listening to music, and watching movies
Something people don't know about me:  I'm actually a very shy person but when it comes to God's work all that shyness falls away.
Favorite Verse:  "Examine me, O God, and know my heart!  Try me and know my thoughts!  And see if there is any wicked or harmful way in me , and lead me in the way everlasting."  Psalms 139:23-24 (AMP) 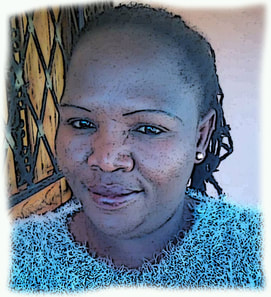 Favorite food:  Stew and steam bread
Hobbies:  Reading, playing games, watching tv and listening to gospel music
Something people don't know about me:  I am a quiet and shy person but when it comes to the things of God, I become very strict. I love to laugh.
Favorite Verse:  "For I know the plans i have for you," declares the Lord, "plans to prosper you and not to harm you, plans to give you a hope and a future." Jeremiah 29:11 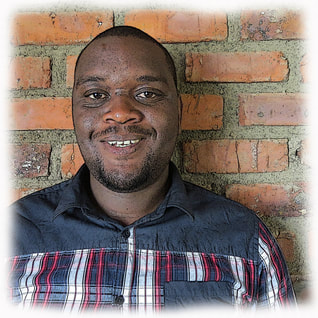 Future is a typical rural boy born and raised at Moletjie Ga-Semenya just outside Polokwane.  He was raised as the only boy amongst three girls.  He was saved in 2002 under the Evangelic Gospel Power Ministries then later joined the International Assemblies of God under leadership of Pastor Legora. Future studied Internal Auditing with Tshwane University of Technology and graduated in 2011.  He is currently working as a Quality Management Systems Auditor. Apart from being involved in church leadership he has been involved in various structures work related and political.

Favorite Food:  Pap, beef and wors with chakalaka
Hobbies:  Stand up comedies, meeting new people and music when alone
Something people don’t know about me:  When I was doing my matric in 2007, I got sick to an extent that I had to skip school for a period of four months. I went to various doctors and hospitals who had no idea of the nature of illness I was suffering from. I was urged to conduct lot of tests including cancer, HIV/AIDS, diabetes and the like but all that was in vain.  Then one day I attended a revival at one of our local churches. I was specifically called to the front through prophetic ministry, prayed for and got healed. From that date I went back to school and passed my matric.  The funny part of it is that even to date I don’t know what I was suffering from...Lol
Favorite verse: "The meek shall inherit the earth." Matthew 5:5 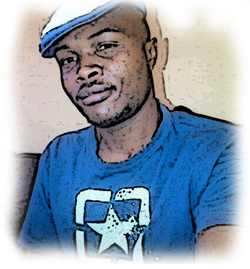 Bhekani finished his Theological Studies at Global School of Theology Northwest Campus in 2013. He has been working in the Mpumalanga District since 2007.  In 2009 he started working with the Hasselbrings (IAG missionaries) building or manufacturing steel structures for IAG churches who currently fellowship in shacks.  Until today he is still working with them.   In 2011 he was elected as the NYM Missions Officer.  Prior to this he served as the Mpumalanga District Youth Missions Officer.

Favorite food:  Spaghetti, and yes meat like most African men
Hobbies: Playing with kids, doing braii, reading Theological books
Something people wouldn't know about me:  Bhekani grew up in Swaziland with his family that remained in Swaziland when the rest of the family moved back to South Africa.  He moved back to South Africa after finishing his grade 12 there.   At the age of 13 months (baby) he was burned by a bag of cement that his uncle was burning after building.  He was hospitalized for 15 months, and by the grace of God he did not died. Now he knows that the devil did not want him to succeed in doing what God has called him to do.  That's why he wanted to kill him with the fire. But by grace he is well and good.
Favorite verse:   "Before I formed you in the womb I knew you, before you were born I set you apart; I appointed you as a prophet to the nations." Jeremiah 1:5 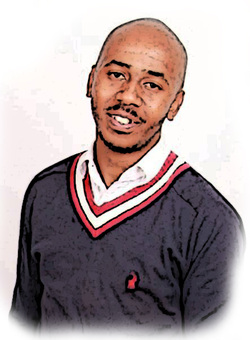 Pule is from IAG Living Waters Revival under the leadership of Reverend Motsatse, down in the Eastern Free State, in a homeland called QwaQwa.  He studies Agricultural Management at Central University of Technology, Bloemfontein.  He loves the Lord and appreciates the power that is vested in young people.

Favorite food:  African (Rice and beef stew)
Hobbies: Serving, live music & poetry, camping, reading and series
Something people don't know about me:  As a child, I grew up in a two room house without a TV. We use to watch TV dramas at our next door neighbor's for a shilling (10cents). One time we went to throw stones at the river and I came back with a bottle containing larvas (second stage after the egg in the life-cycle of the growth of frog).  I don't know what went in my Mom's mind, instead of beating me, she shouted and eventually said, "Go to your room!"...Confused I responded, "Which room?"  She rolled her eyes, (remembering we stay in a 2 room house) and said, "Okay, go to your corner!"  LOL.  I went to a corner of the kitchen and cried.
Favorite verse: "To them that received Him, and believed in Him, He gave them the power and the authority to be called the children of God."  John 1:12

Sarah is an ordained minister with the Assemblies of God, USA.  In 2007, Sarah assisted missionaries, Wayne & Delight Peercy, for six months with the IAG in the Limpopo province.  She then returned to the USA to receive her full-appointment as a missionary.  From Sept. 2009-Nov.2012, she worked full time to develop the National Youth Ministries of the IAG.  Sarah has traveled all over South Africa training youth leaders.  She has also helped to develop many resources for the South African youth.  During her first full mission term, she resided for two years in Polokwane, Limpopo, and then one year in Pretoria, Gauteng.  Since 2014 she has helped pioneer "The Journey" university ministry. Currently, Sarah has helped begin "The Journey on three campuses of Tshwane University of Technology. She is also helping our IAG pastors reach the schools near them.

Favorite food:  Mexican food
Hobbies:  Painting, baking, hiking, and watching old classic movies (even ones without colour!)
Something people wouldn't know about me:  When I was a teenager, I was very shy.  This prevented me from being a witness for Christ.  I thought this was my personality, but then I realized the devil was trying to silence me with fear.  I began to pray for boldness.  In a year's time, I went from being shy to being bold for Christ.  The Holy Spirit has the power to transform us!
Favorite verse:  "...Open your eyes and look at the fields! They are ripe for harvest."  John 4:35b
Powered by